I love being outside. I love camping, hiking, backpacking, trail running, road running, running in general...really any activity that involves being out in the sun and out in nature. Except with bugs. I am not a fan of bugs. That being said, it's so awesome that Alex also enjoys the great outdoors. With the weather taking a turn toward spring, we picked up a National Parks pass and a Texas State Parks pass and started exploring nearby parks.

Arches National Park in Moab, Utah
In January, we made a road trip out to Colorado, Wyoming, and Utah so that we could look at potential colleges. On the drive back to Texas, we saw signs for Arches National Park out near Moab, Utah. We were tired of being in the car and thought it would be a great idea to stretch our legs on a hike. And we did just that.

There was still plenty of snow on the ground, which made for some pretty muddy trails. Since we didn't pack hiking shoes, we were limited to a few not-so-muddy trails just off the road. With these hikes being fairly short, we did a number of them to view as much of the landscape and geology as possible for our brief stop. We saw the Moab fault, petrified sand dunes, balanced rock (a sandstone boulder perched on top of a rock pedestal), garden of Eden (a series of rock towers and formations), and double arches (two rock arches attached to the same anchor rock). Each of these are incredible rock formations, and having a geologist right there with me made the experience even better. I'll admit it, I'm a science nerd, and I loved learning about how these rock structures were formed.


After a couple hours, and a brief tour of the visitors center where I got June a souvenir park patch and myself a park magnet (because I collect them from trips), we had to get back on the road. There is still so much more we want to explore in that park, and so many more trails we want to hike. The views are just so surreal and so different from what I'm used to viewing. I'm really glad we stopped there. I'm hoping we make this a regular road trip tradition: taking rest stops at national/state parks.

Palo Duro Canyon State Park in Canyon, Texas
Our local state park is Palo Duro Canyon, the second largest canyon in the United States. Full of hoodoos (tall, thin rock spires) and caves, this park has many areas to explore. The most famous hike, and my favorite one, is the Lighthouse rock trail. This is the hike Alex and I did together earlier in February. It's a 6-mile round trip hike up to the signature feature of Palo Duro canyon, a hoodoo called Lighthouse Rock.

The trail is easy at the beginning, then becomes more challenging the closer to Lighthouse Rock you get with the final segment being a decent climb up to the formation. It's a gorgeous trail however, with stellar views of the canyon's other rock formations such as Capital Rock and Monkey Head Rock. Trees even line the trail toward the end and that shade feels so good when the weather heats up. Even on this trip, where it was a bit chilly, the shade felt good. 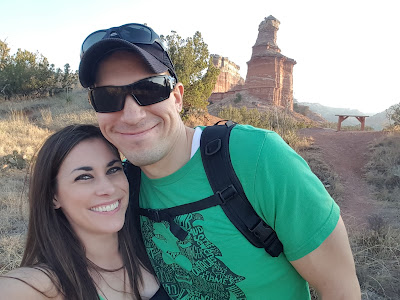 I wore my brand new Emerald City Skirt Sports dress for this excursion. I've never felt so dressed up, or so comfortable, on a trail before in my life. I got so many compliments on the dress, and the Skirt Sports shorties I wore underneath (I wore the 5.5 inch shorts) had enough pockets to hold my phone, keys, and some Powerbars. I find that when I feel like I look cute in my workout outfits, that I perform better and just plain feel better. This was proven true today as I scaled rocks, then climbed back down them to complete this hike. 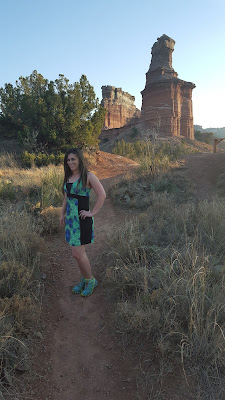 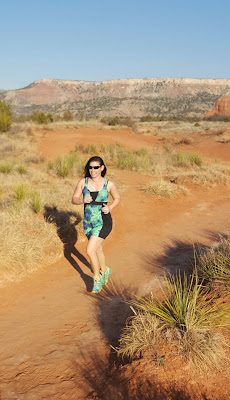 On the way back of the hike, the sun was starting to set and the weather was getting cooler. We could hear the coyotes in the distance howling over a kill. We even saw a recently-hatched rattlesnake making its way across the trail. That day was a great day to hike, a Monday evening. There were only a couple people on the trails and we basically had the path to ourselves.

Following this hike were many day hikes out to Palo Duro with June and other family members. We explored the Big Cave, and a smaller cave in a mesa, and did a couple easy hikes with the kids. June loves hiking and being outside, and I really enjoy my time with her and Alex, geology facts and all.

Caprock Canyons State Park in Quitaque, Texas
Since Alex also had Leap Day off, we decided to go hiking again. This time, we went to Caprock Canyons State Park. When he was attending college, this was the place that they did a lot of their field work, so Alex was eager to show me some of the geology he had to identify, map, and study. And I was eager to hear all about it.

We hiked a couple trails that added up to a total of about 6.5 miles. We started with the upper canyon trail which followed right alongside a creek and led up the canyon wall, and that trail led straight into the Haynes ridge trail through the brush of the canyon rim, and that led to the last third of the canyon loop trail which took us back into the canyon and to the car.

On our way up the climb of the canyon wall, Alex took me off trail a bit to show me his favorite spot in the canyon, a flat rock protruding off the canyon's side. The view from that spot was spectacular! I could see just about the entire canyon stretching out beneath us. It was the exact perfect place for us to enjoy our picnic lunch of peanut butter and honey sandwiches, apples, and PowerBars. I felt fairly dressed up for our canyon date in my Skirt Sports Jette capri and Eclipse tank top in Alex's favorite colors: blue and green. I also got a really great tan from those 3 hours of hiking and climbing and picnicking. 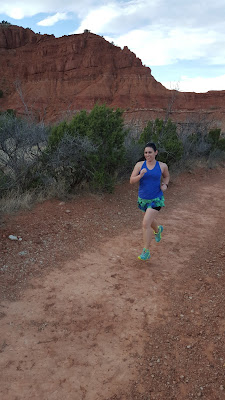 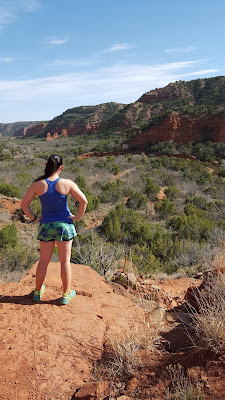 I tend to be fairly terrified of wasps, and there were quite a few of them out during our hike, but luckily they mainly stuck to the water areas and left us alone. I also have a fear of falling (not heights, but falling off heights), but this hike I felt much more confident on the trail--even the steep climbs and downhills! I think all this recent hiking is building my confidence and helping me to conquer my fears. Maybe my fear of wasps and spiders will be conquered next.

Hiking with Alex is such a blast. He makes everything more fun and just plain better. He even carried the camelbak full of water for the both of us and packed a lunch for us to eat while on the trail. He is so incredible, and my favorite hiking buddy.
Posted by Unknown at 10:56 AM
Email ThisBlogThis!Share to TwitterShare to FacebookShare to Pinterest
Labels: Arches, Arches National Park, canyon, Caprock, Caprock Canyons State Park, hiking, Moab, national parks, outdoors, Palo Duro, Palo Duro Canyon State Park, Skirt Sports, state parks, Texas, trail running, Utah