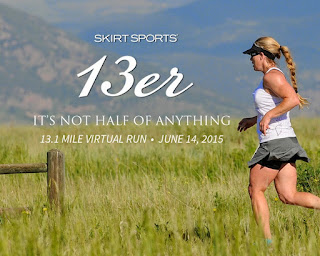 Hooray!  My summer semester has ended and I conquered my course with an A.  I can't think of a better way to start off my journey back to school.  Granted, I did average about 40 hours per week on this class, but it paid off and I learned a lot that I hope will help me in future schooling and really the future in general.  So, what does this mean?  It means I get to catch up on my blogging!  This first topic I've been so excited to write about is my race recap of the Skirt Sports 13er racecation that I ran in June.

The weekend was full of skirts, sports, and sisterhood.  I rode with a fellow skirt sports ambassador, Aleasha from A Liddle Run, and the trip was a blast!  The ride out went by so quickly and before we knew it, we were already in Colorado (as the Colorado highway patrol man informed us since we were still driving at the Texas speed limit).  Driving adventures aside, we were able to meet the entire Skirt Sports staff and get to know these wonderful, hard-working ladies.  It was like meeting celebrities as we have heard so much about them, worked with them via social media, but had never met in person until this point.  I felt so welcome within this group.  They are so passionate about what they do and so caring about the women they know.

Our pre-race festivities included an Ambassador banquet where the inspiring Nicole DeBoom spoke to us about her own athletic journey and the mission of Skirt Sports.  She is a master story-teller, and her story of how she was inspired to start the clothing line was incredible.  I encourage you to read it if you haven't already (just click here).

The skirt sports ambassadors were then treated to a gorgeous hike in the mountains.  Coming from the great plains of West Texas, this was quite the treat.  I always forget how much I love the mountains, and how much I miss them.  And I always forget just how brutal altitude and inclines can be!  But it's always worth it once I see those awe-inspiring views from the top.  I like hiking in the very back of a large group.  I think that comes from my military experience where I always placed myself at the back of my flight to make sure no one fell out or was injured (okay, and sometimes I just wanted to go slower).  Since I'm also a youth camp director, I always hike in the back for the same reason:  to help those that need it, and to make sure no one gets lost or injured.  It's now habitual for me to want to do the same thing on any other hike.  That doesn't really add to the story, but it gives you a little more insight about me.

Our last pre-race activity was a lake party hosted by Noelle Wilson, the amazing lady we stayed with.  She also works at Skirt Sports and is the head of the ambassador program.  She is one of the sweetest, most selfless and caring people I've had the pleasure to meet.  The lake party was a blast, even in the unexpected thunderstorm that swept through it.  I can never turn down a burger, and that's exactly what we had.  It was actually quite perfect as I prefer a burger as my pre-race dinner.  I ate so much during this Ambassador retreat, and it was all delicious.

The next morning was the 13er in Boulder.  Thousands of women were in attendance and the feeling of sisterhood was contagious.  I don't know what it is about women runners, but I find them to be so welcoming and so encouraging.  The atmosphere is just plain awesome!  Since I've been fairly ill with my thyroid not-so under control, I decided to play it safe and run the 10K and I'm so so SO thankful that I did!  Again, I didn't consider just how hard the altitude is to run in and it took my by surprise right at the beginning of the race.  Seriously, at the half-mile point I was already feeling it.  Instead of trying for a personal record (PR) in unlikely and possibly even thyroid-madening conditions, I decided instead to turn my focus outward.  I shouted encouraging words and gave out high-5's to passing runners (in both directions).  I stopped to help runners take selfies in front of the beautiful scenery that encompassed the course.  I ran and walked with so many interesting women and girls.  That alone made this run memorable.


At the half-way point I even found a new running buddy, and we ran the rest of the race together.  There was this great viewing spot and I knew I wanted a picture by it, but I am horrible at taking selfies.  Luckily, there was another lady who was thinking the same thing as me.  So, I offered to take her picture if she took mine, and it was a run-friendship in the making from that point.  As we ran together, I come to find out that Jennifer is also a blogger (a seriously fabulous blogger) and Scootadoot (I had to follow her once I had 4G on my phone again).  She was also training for her first half that she just ran on August 1st!  Way to go girl!  She was so much fun to talk to, and although the going got tough cresting a mesa (and obviously still altitude), the second half of the race went by a whole lot faster than the first.  We crossed the finish line together and she scored a new 10K PR!

One of the best parts of this race is that there is gourmet cake from Kim and Jake's Cakes at the finish line. It was the best cake I've ever had!  Now, I love cake, and it was hard to decide between red velvet, chocolate, vanilla, and the many other varieties offered.  I ended up with a slice of vanilla and a slice of red velvet and YUM!  Genius, pure genius offering cake at a race.

Jennifer and I parted ways since I was going to stay through the end of the race and I met back up with my fellow Skirt Sports Ambassadors.  Toward the end of the race, there were only two runners left on the course, and I thought it would be a great idea if a few of us ran their last leg with them to help motivate and encourage them to the finish.  I've finished last in a race a few times and it was always nice to have someone to run with.  So, Nicole DeBoom, Aleasha, and I did exactly that. We met two amazing women, and ran the last part of the race with each of them (don't worry, we stopped just before the finish line so their victory finish photos would be all about them).  They were so motivated as they persevered on in the heat of the day and on their own.  I find that just as inspiring as the runners who finish first (also amazing, especially since Aleasha placed in her age group).  And I have to admit, it felt pretty good to be on the motivating side and to encourage others.

The Skirts Sports 13er race weekend was the most memorable, inspiring, and just plain fun racecation I've done so far.  It was very well organized, the expo was so good I may have bought too many running things, you get a finisher skirt, and the women were pretty incredible.  I recommend this race to beginner runners and veteran ones alike.  I can't say enough good things about this race.  I'm already planning my trip for next year.