Agony: the Long Run on a Treadmill

I have a confession to make.  I absolutely, without a doubt, utterly loath the treadmill.  I ofttimes refer to it as a dreadmill.  I went an entire year without setting foot on that torture device, and then it snowed.  A lot.  Enough to coat the roads with a thick layer of extremely slippery injury-inducing ice.  I know my limits and they are: temps above 100 degrees, temps below 10 degrees, winds over 35 mph, natural disasters, and any ice at all.  I already tried a run on ice and it defeated me with a painful and embarrassing feet-over-head landing-on-butt slip.  My booty was bruised for a couple weeks, and my pride took a major hit.  So, no more ice-running for me. 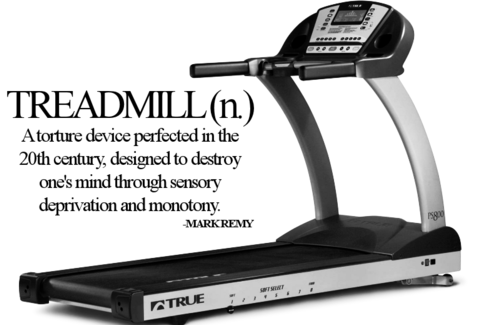 Usually when I see snow/ice/freezing rain in the forecast, I just plan my training around it as it doesn't normally stick around for more than a couple days.  Not so with this past month.  The ice lingered and lingered and is still lingering!!!  It's like my own personal no-running-outside hell.  And, I had a critical, can't-skip-under-any-circumstance 14-mile long run scheduled.  What was I to do?  I'm training for a marathon and I already found that skipping a week of running is detrimental to my endurance fitness.  So, even though I really, REALLY didn't want to, and I mean AT ALL, I used my gym membership for more than the group fitness classes and weight room functions I acquired it for.  I ran my 14 miles...on the treadmill.
The worst part about treadmill running for me is the sheer boredom of it.  I didn't want to do an interval-type run as I was running such a long distance.  Instead, I needed just a nice and steady run at an easy pace.  To stave off the monotony, I came prepared with my tablet set up with a new Kindle book I bought just for this occasion and Friends on Netflix, and my phone ready to play the Audible novel I've been working on. That may seem like a lot of options, but when I'm on a treadmill my attention span lasts just a matter of minutes, so I need different options that I can switch between when the going gets tough.  For fueling, I brought a water bottle, another bottle full of Nunn, and two Gu's.


Since the treadmills at Gold's Gym have 60-minute time limits, I decided to run my 14-miles in 5-mile increments.  I'd use the time between those increments to hydrate, fuel up on a Gu, and use the bathroom if needed.  I listened to five chapters of my audio novel on Audible, I watched three episodes of Friends on Netflix, and I read four chapters of my book on Kindle.  The last 15 minutes of my run, I just listened to music on Pandora.  I needed something that I could pace myself to just to keep me going.  I had to alternate between four forms of media to keep the inevitable boredom at bay for as long as possible, and it worked.  That strategy proved quite successful, although the last four miles were excruciatingly painful both in monotony and just plain physically.  I was able to maintain my pace for the first 10 miles, but on those last four, I had to take two-minute walk breaks every eight minutes.  Still, I did it!  I completed my long run on the treadmill!  This was a brand new record for me, a personal best if you will.  Although I really, really, REALLY hope that I never have to do another 10+ mile run on the treadmill.  Ever again. 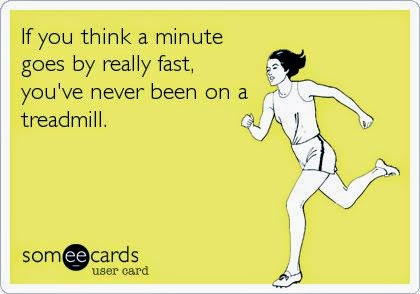