Nothing in running is better than running a destination race with one's best friend, and that's exactly what I had the pleasure of doing this last weekend.  My best friend in the world got me race registration for the Gasparilla Distance Classic 15K in Tampa, Florida.  Coming from West Texas, Florida beaches are absolutely breathtaking.  It was just so nice to be somewhere more tropical and near the water.  It was even nicer that I got to see Jenna. 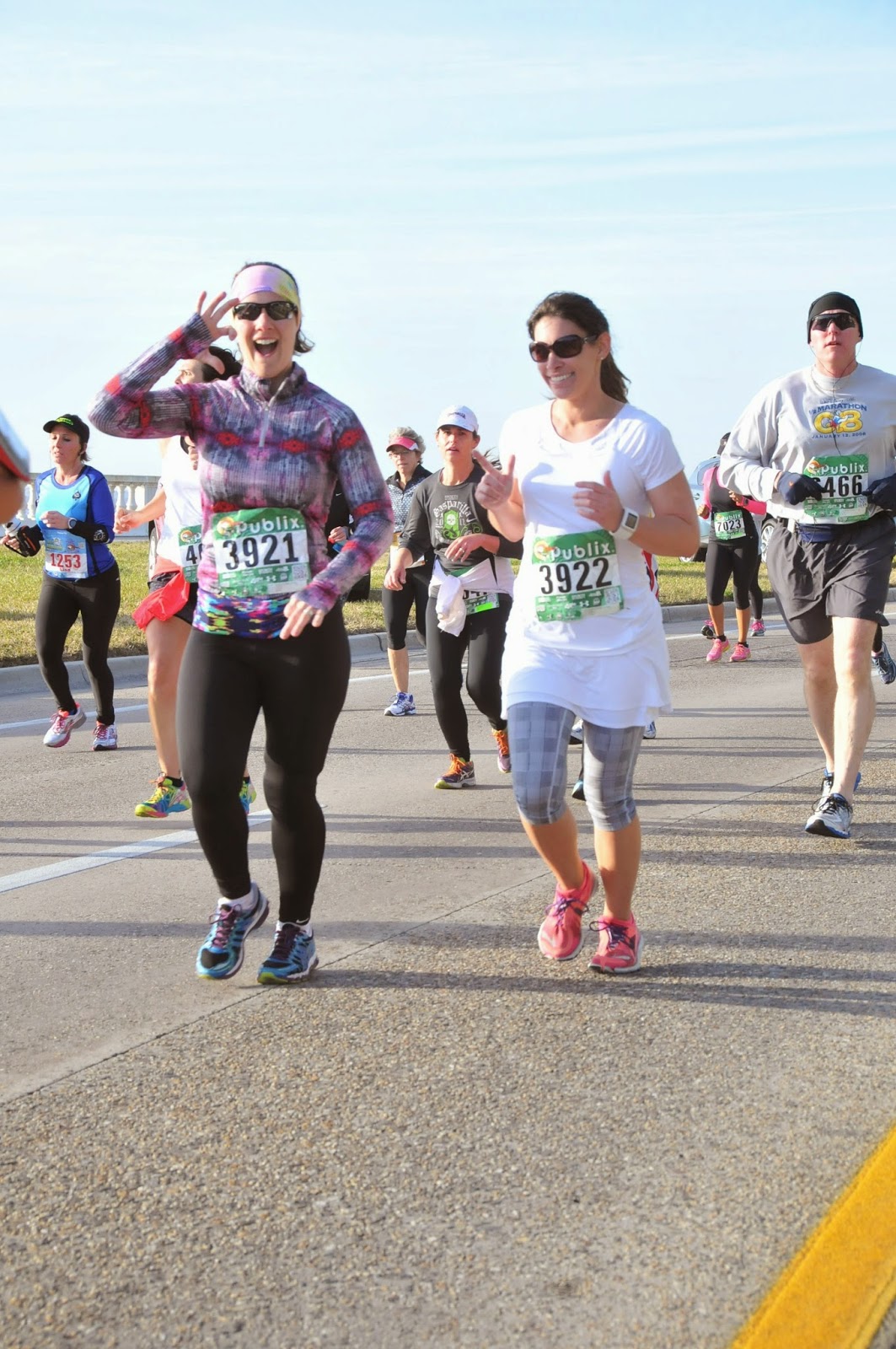 We browsed the expo the night before to pick up our packets.  We were quite excited to see how big the expo was!  The packet pick-up was run well.  Even with a long line ahead of us, we got our bibs and shirts in no time at all.  We received all sorts of free swag from bags to cooling towels to all sorts of fitness samples.  The expo had so many booths set up:  Publix Grocery Store, Sports Authority, shoe vendors, and athletic apparel of every brand.  I was even able to stock up on BodyGlide, Gu, and SweatyBands.  The best part about the expo though was that we scored major deals on some really great running shoes.  Jenna got her favorite pair of Brooks, and I finally got to try out the Sketchers GoRun series.  I've been intrigued by these since I saw that they now sponsor Meb and Kara Goucher (my two favorite runners), so I've been dying to actually try them for myself.  They felt great on my very short test-run in the expo and I can't wait to use them for my next training run.  This expo was a runner's dream.

We woke up bright and early the next morning to ensure we would be able to make our 6:15 start time.  Traffic was crazy as we searched for a parking garage near the race grounds.  After 30 minutes of searching, we finally found one, and we jogged back to the expo area to warm-up before running.  The temperature was a chilly 45-degrees, but was supposed to warm up to the high 60's after sunrise. 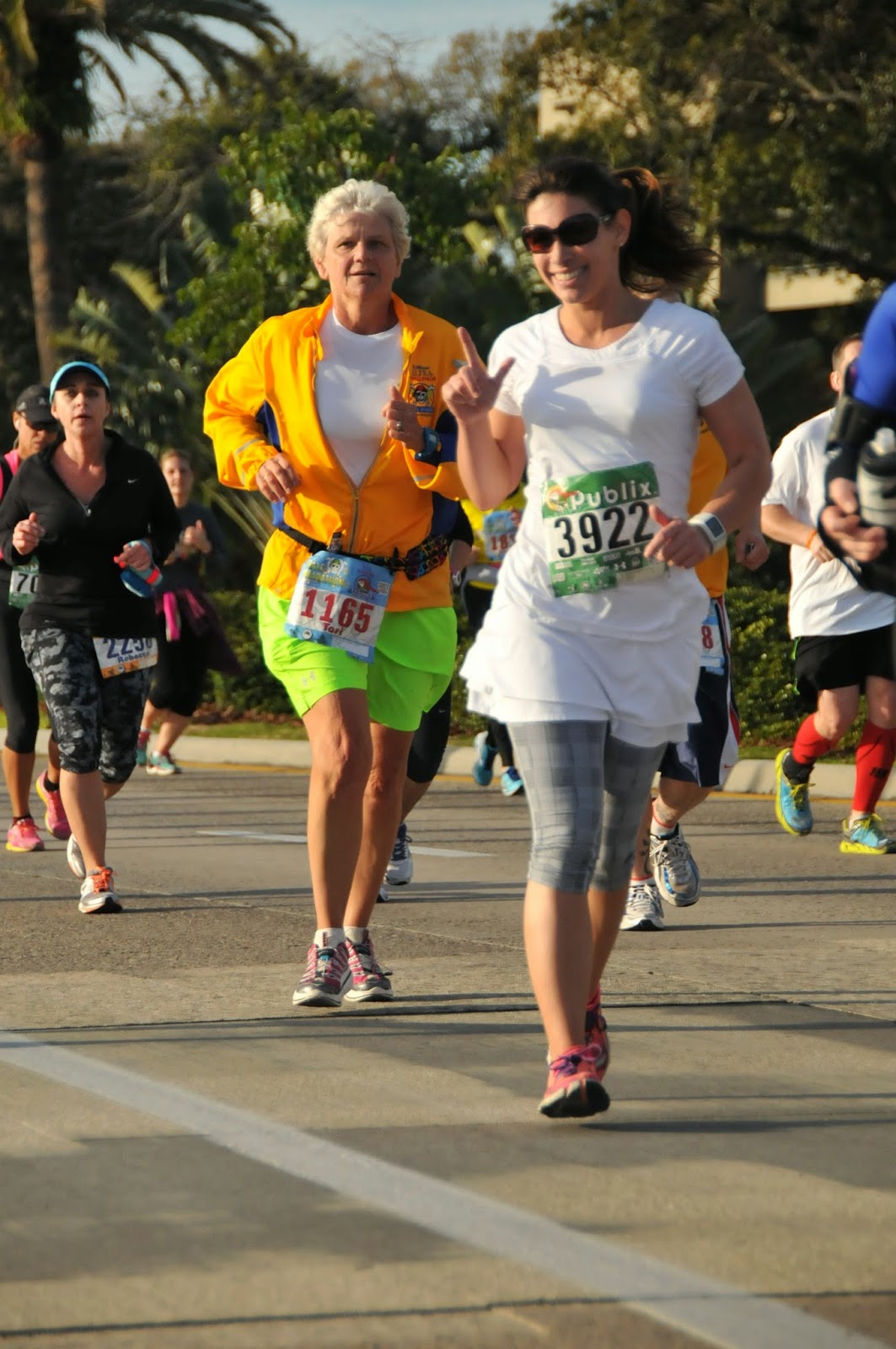 This race included four distances: 5K, 8K, 15K, and half marathon.  Saturday was the 5K and 15K, with the 5K starting close to 10am.  We lined up at the start between the 10:30 minutes per mile and 11 minutes per mile pace groups. There were thousands of people there!  So many people that we could barely see the starting line from our position.  Once we were off, it took us a few minutes to actually cross the starting line, and the first few miles were so congested that it added about two minutes per mile onto our time as we tried to dodge around people and pass the slower runners.  Either people didn't line up correctly, or they gave themselves too-fast of a goal time because a lot of the runners that were before us were running at a the fastest a 12 minute mile pace.  So, Jenna and I jumped, bobbed, and weaved around people until the crowd thinned out enough for us to actually run at our 10 to 11 minute pace.

About at that time, we were running right along the water as the sun was rising.  It was breath-taking!  The view was so scenic and gorgeous that it was a pleasant distraction from the more painful parts of the run.  The course was an out-and-back full of spectators holding a variety of quite creative signs--both motivating and hilarious--many talented musicians, and photographers. Around the 6.5 mile point, my calves and legs started to sieze up and ache to the point where I had to keep slowing down, but I did not stop running!  It must've been from all the people-passing acrobatics we had to do at the beginning as I have not hurt like this in a race this short before!  Still, we ran on and on until we were in the final mile.  From there, I made myself speed up with the support from Jenna.  We were passing people again clear to the finish line, which we crossed holding hands high!  We finished in 1:39:53, at a 10:30 minutes per mile pace.  Not bad at all.

We were tired and sore and hungry, but wow did it feel good when that finisher medal was placed around my neck.  Photographers were everywhere and we got all sorts of pictures taken to include one with a couple of pirates (as this was the Race for Booty!). 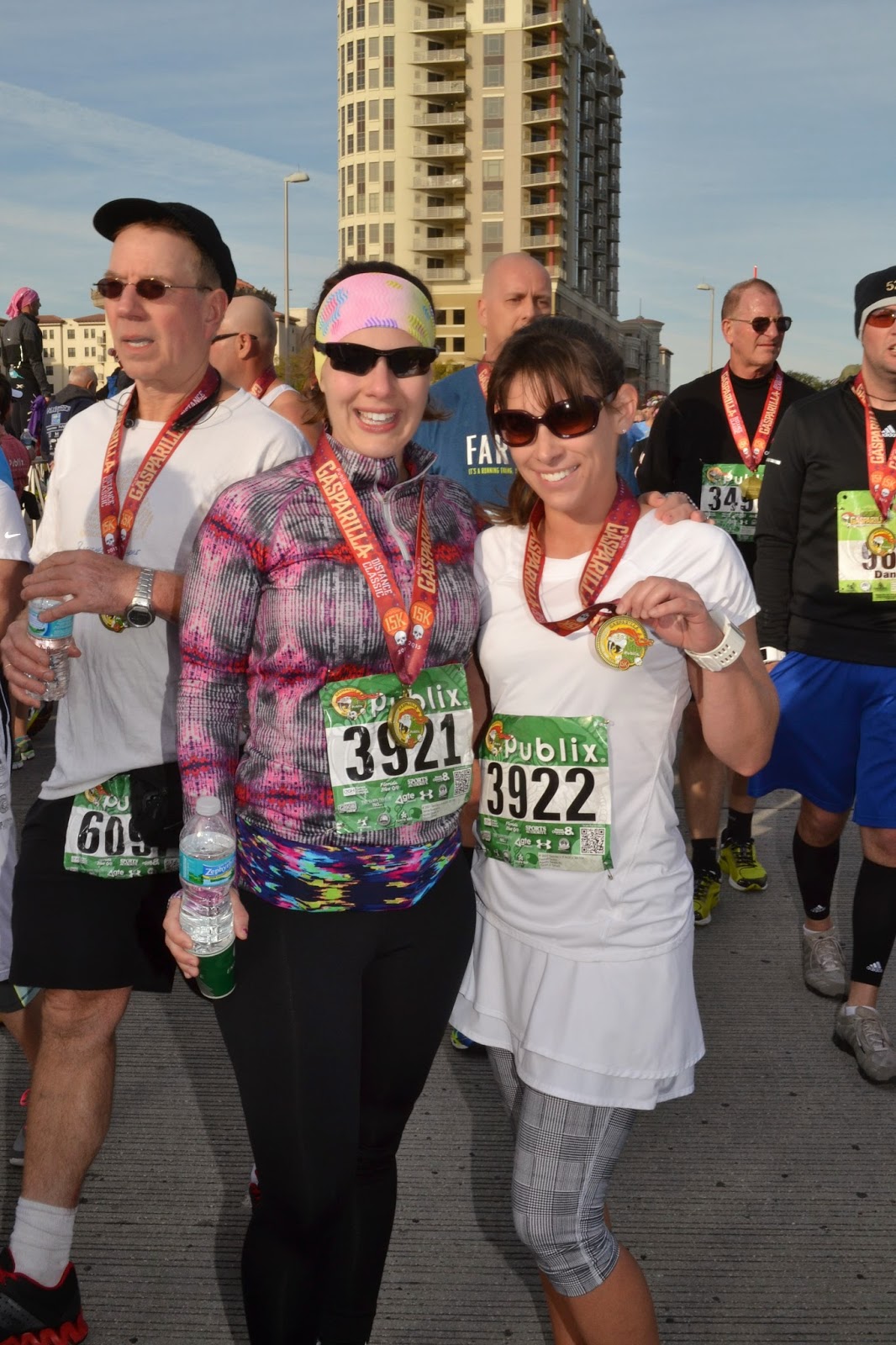 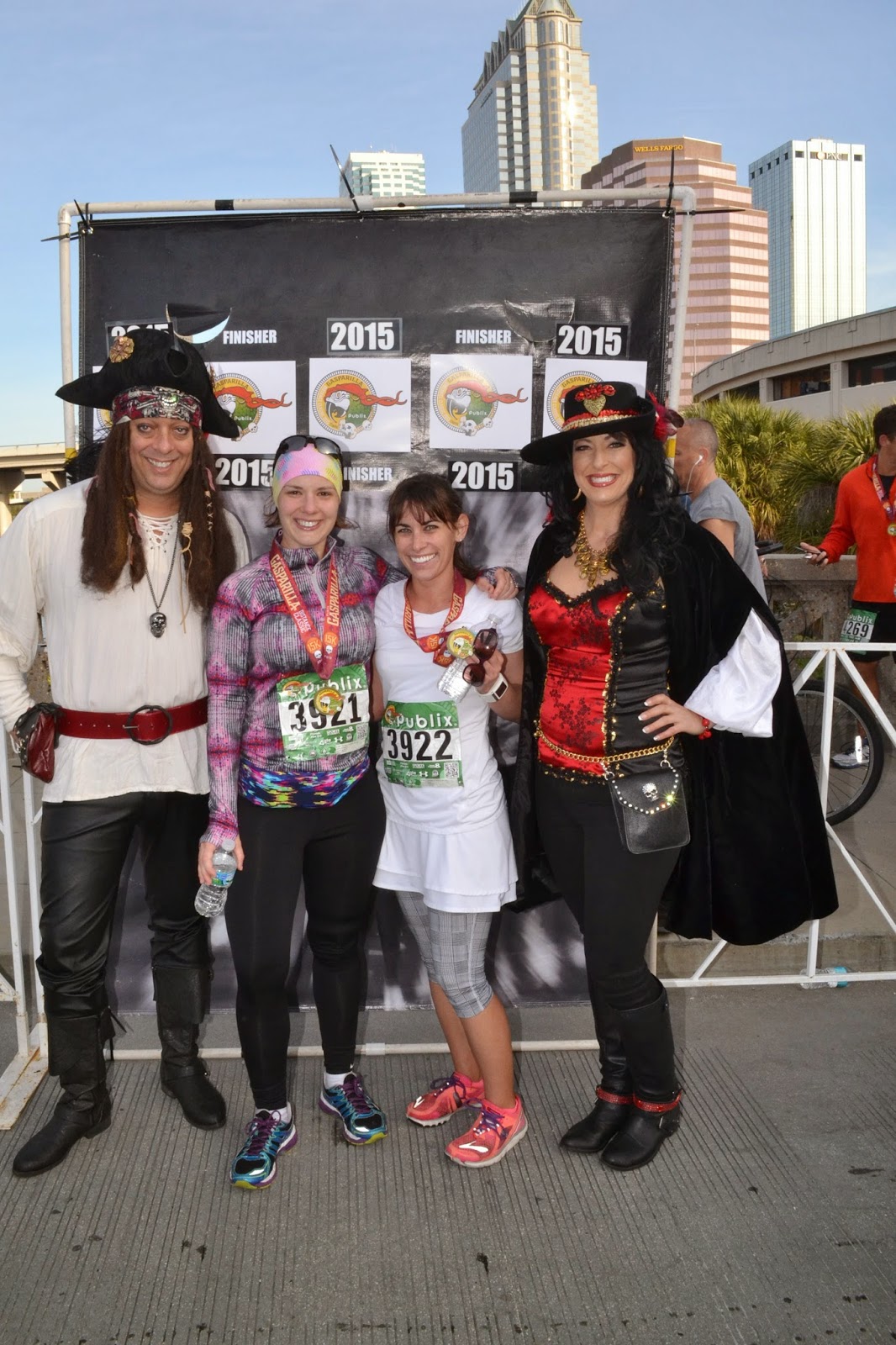 This racecation was one for the books!  I haven't gotten to race with my bestie since the beginning of 2013--and we scored some serious bling--AND I got a 15K personal record!  The race was pretty well organized, the aid stations well stocked, the medal was impressive, the shirts were cute and functional, the race pictures were up the next day, and the expo was rocking!  I would recommend that next time, they have starting waves for the 15K to prevent congestion as they did this for the 5K and half marathon.  In light of that, it was still a great race and I still got a pretty good time.  The best part though was that I got to do all of this with my best friend. 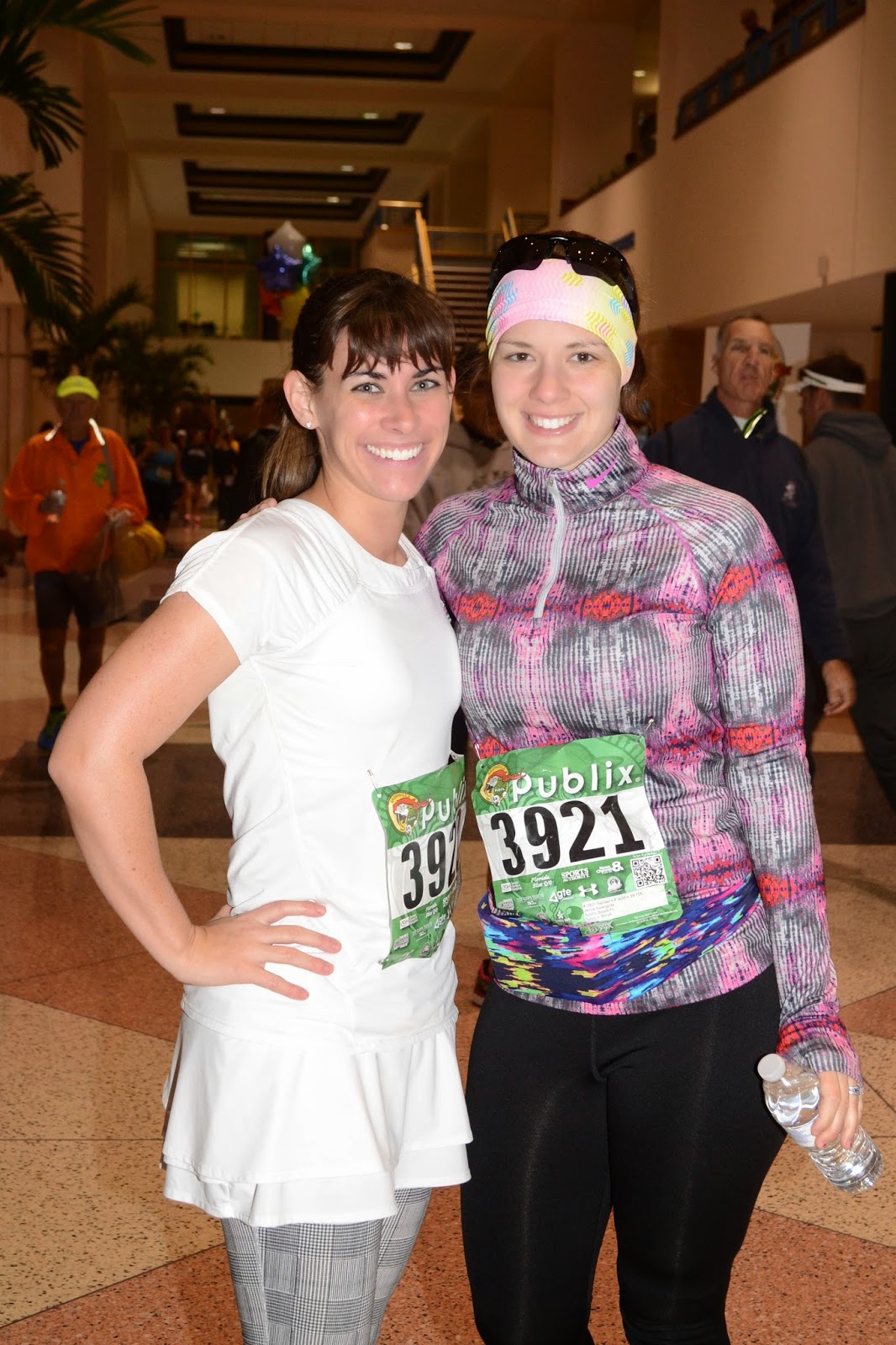