Daniel was a prophet (FHE)

Family Home Evening was lesson #8 of 9, on Daniel and the lion's den.  Basing my lesson on the song verse about Daniel, my goal was to teach June to have the courage to choose the right.

Song:  We sang verse #8 of the song Follow the Prophet while marching around the house playing follow the leader.  The verse goes as follows:

Scripture/Story:  I read June the story of Daniel from both the Berenstein Bears Storybook Bible and Old Testament Stories.  She sat through the stories well enough, but she had already glimpsed the activity and was ancy to play the game. 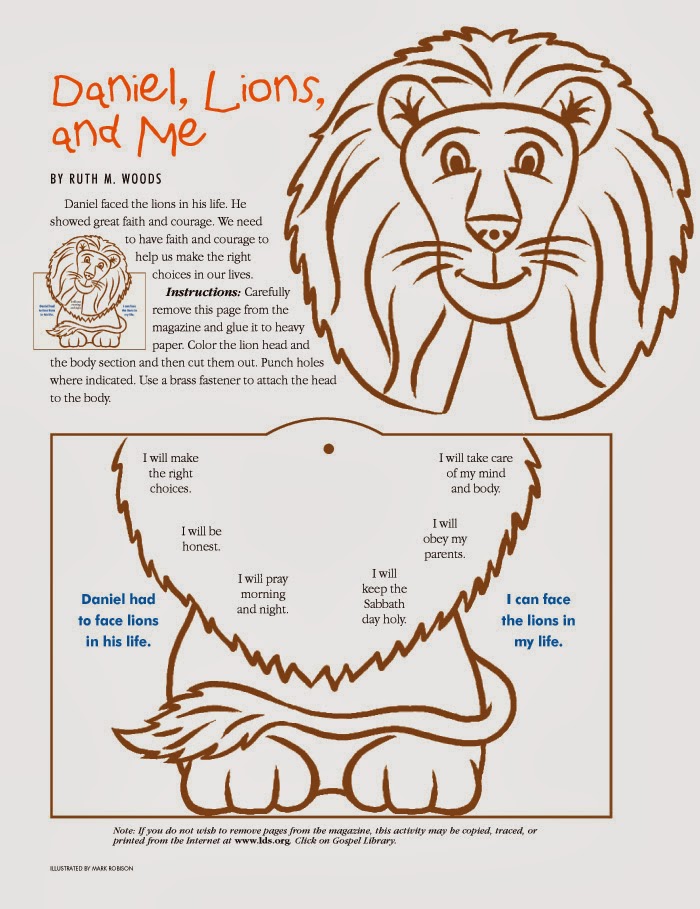 Lesson:  Since Daniel had the courage to keep praying and following the standards the Lord set forth, I wanted June to learn how she can have that same courage.  We discussed ways she could choose the right using a lion-wheel I found in the Friend magazine.  As I talked about how she should apply each standard, I gave her a shield with a picture of the standard.  I just printed out each side on green paper and glued them together to make the shields.


Activity:  With June protected by her six standard shields, she was thrown into the lion's den.  I then taught her about persecution and how some people will try to get her to make bad choices to the point of being cruel.  I told her she could have the courage to withstand them and keep choosing the right.  In her "lion's den", where I took some of her stuffed animals and put paper manes on them, she placed a shield at each lion and she was "protected" like Daniel was.  Then, she played with her "lions" since the "angels had shut their mouths."


June loves any game where she can play with her stuffed animals, and this one was no exception.  She thought it was funny how her bears and her baby hippo had lion manes on.  She also liked to collect the shields and spin the paper lion.  At the end of the activity, I gave her her very first CTR ring and told her that when she looks at it, she should be reminded to choose the right.  Later on in the day, she said, "Mommy!  We need to pray to have the shield!"  So I figure that means she's learning something.  I love Family Home Evening nights.